There are many reasons why I love college, but one that holds a pretty high position on the list is how early spring break comes.  With the exception that ideas of warm weather and flip flops don’t immediately come to mind this early in March, it is a great feeling to reach the halfway point of another semester.  On the other hand, it’s hard to believe that there’s so little time left of sophomore year!  Time is flying by, but I’m trying to enjoy every minute of it.  And believe me, I have enjoyed every minute of this spring break.  Don’t worry, I’ll tell ya all about it.

Ben Rector & Needtobreathe.  The first night of spring break involved my attempt to navigate through city traffic while trying to read directions that I had printed off of the internet simultaneously, but fortunately (after a few panic phone calls to my mother in which I insisted I was going the wrong way every time… and never was) I made it downtown to see an awesome concert.  If you haven’t heard of Ben Rector, you should look him up right now (or actually, wait until you’re done reading my blog post).  He’s absolutely amazing.  I had listened to several of his songs before this concert (he was the opening act for Needtobreathe), but watching him perform live was a great experience.  AND I got a picture with him after the concert!  I was so excited!  Needtobreathe put on a great performance, which didn’t surprise me at all.  I wish I had known more of their songs, but they were still awesome.

Everyone at the concert!

Beating Dook.  You know those people who get on your nerves because they always talk about how their sports team is better than everyone else’s?  I’m one of those people.  Sometimes I wish I wasn’t like that, and I don’t do it to be obnoxious or conceited, but I just LOVE Carolina so much that I can’t help but believe that there truly is no better team out there.  On the bright side, not many people can argue with me since we’re #1 in the ACC after beating Dook by 18 points on their senior night!  Oh, what a victory.  After their buzzer beater in our very own Dean Dome, I was concerned that Roy’s boys would struggle in Cameron Indoor.  But nope, Dook never held a lead on us.

I am just so proud of our team, and I’m so excited to see what they accomplish throughout this wonderful time of March Madness.  Even though I have high hopes for my beloved Tar Heels, they can completely flop in the tournament (let’s pray that doesn’t happen) and I’ll still tell you they’re the best team out there… because, well, they are.  Also, Kendall Marshall just broke the ACC record for Single-Season Assists, and Tyler Zeller was chosen as the Capital One Academic All-American as well as ACC Player of the Year. Oh, and Harrison Barnes, John Henson, and Tyler Zeller were all ACC first-team.  Just saying.

HOTlanta!  This was such a great part of my spring break.  About a month ago, my friend Kelly asked me if I would be interested in planning a trip to Atlanta, GA for a few days.  So, we did!  I really don’t travel that much, so I always feel a little uncomfortable having to ask the people around me where I need to go or what I need to do to get around from place to place, but the people in Atlanta were so helpful!  Kelly and I got the opportunity to visit the Georgia Aquarium and the World of Coca-Cola, check out some of the team’s open practices for the ACC Tournament (unfortunately, UNC didn’t hold an open practice), and on the last day of our trip we looked for people scalping tickets for the first session of the ACC Tournament and were successful!  We even negotiated the price with the guy trying to sell them to us, and we got a great deal on them!  Who knew that actually worked?!  Not me.  Like I said, I don’t travel much.  We even got the chance to go to the bridal shop that is on Say Yes to the Dress Atlanta on TLC!  When we went inside, TLC was there filming!  It was so exciting, and the bride they were following was something else… I’m not totally sure her segment will air.  Sorry chick.  Anyway, here are some fun pictures:

Kelly and I on our first day in the city!

The Varsity is a huge tourist attraction in Atlanta. Apparently on game days for Georgia Tech, thousands of people come through the restaurant. Crazy!

One of the many pictures I took at the Georgia Aquarium.

Touring the World of Coca-Cola! 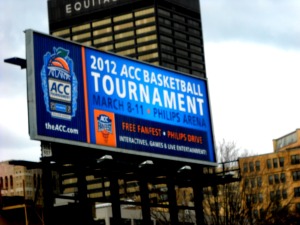 Hanging out with Rameses at the ACC FanFest!

...and getting the death stare from you-know-who.

Bridals by Lori from Say Yes to the Dress Atlanta!

Catching up.  When I got back from Atlanta, I got the opportunity to catch up with my friend Melissa, who is studying abroad in Italy this semester.  I was originally hoping to be much more intentional about staying in touch with her while she’s there, but I haven’t done as well as I had hoped.  We skyped for about an hour, and it just made me so happy to hear her talk about everything that God is doing in her life and to see how much she is enjoying her time abroad.  My friend Morgan is also in Italy with Melissa, and I miss both of them so much!  They are both such great friends to me, and being at school without them has definitely been an adjustment.  But it’s always such a great feeling to see the people I love this happy, and I can’t wait to see them this summer! 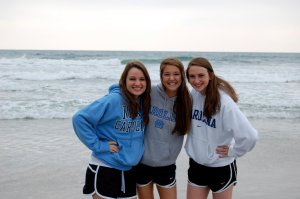 The three of us at the beach last year- such sweet friends!

Family Time.  Last but not least, I got back from Atlanta just in time to see my adorable little sister participate in her school’s talent show.  Her Kindergarten class did some dance (I honestly don’t remember what song they did) and she was dressed up with boots and a bandana with a little cowgirl hat on.  When my family rushed backstage to tell her how great she did, she was beaming.  She couldn’t stop smiling the whole time we were talking to her!  Too cute!  It was so cute that this picture of her and I can close off this blog post:

So who needs warm weather and flip flops for spring break?  I’ll save that for summer since I’m already halfway through the semester! Wooo!

Oh, and Go Heels- hopefully we can finish off spring break with an ACC Tournament win!

If you made it through this entire blog post, you’re awesome.