When I started this blog post today, I found a draft of a post that I started in February that I had titled “where will you go?”  It was in response to a message about hell that I had just heard at Cornerstone the night before, and I felt compelled to write about everything that I was thinking as it pertained to the subject.  But for some reason, that post was never finished.  And even as I sit here now I find myself trying to figure out exactly how I’m supposed to talk about something as serious as this.  Can I not just write another blog post about summer vacation or give you ten reasons that I’m ready to go back to school?  Nope, I can’t- because I’m confident that God is calling me to write about this.  So on that note, let’s talk about hell. 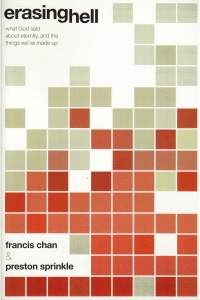 Everything that I talk about in this post can be traced back to one of two sources: 1) Erasing Hell by Francis Chan and 2) A sermon by Tim Keller titled “Hell: Isn’t the God of Christianity an Angry Judge?” (which you can find on iTunes).  Hell is something that I have tried to ignore for a very long time.  When I was really little, hearing about hell was so scary that I wondered how anyone could choose not to believe in God with such a horrible fate before them.  And as I got older, I began to focus so much on what it meant to be a Christian in this life that my concerns about the after life just fell by the wayside- which was very convenient, because thinking about my eternal destiny can be a bit of a burden, you know?  But then came the night that I sat in a lecture hall and listened to a message about hell at Cornerstone, and all of a sudden, my heart felt heavy with regret when I realized that I had neglected such a big part of who God is.

I’m confident that I’m not alone in my ignorance of hell.  For the longest time, I struggled with how I knew this wonderful, loving God- the God that makes all things work together for my good and loves me unconditionally- and yet, this was the same God that could sentence people to an eternity in hell?  How does that work?  But no matter how much it bothers me, the truth of the matter is that I can’t conjure up the perfect idea of who God is and serve that “model” of Him. That’s not how it works.  God is God- which means that He can do whatever He pleases (Psalm 115:3).  Isaiah 55:9 says, “As the heavens are higher than the earth, so are my ways higher than your ways and my thoughts than your thoughts.”  Basically, God’s way is ultimate.  Chan uses this to point out that what we find in Scripture isn’t always going to line up with our natural way of thinking, but it doesn’t change the fact that it’s God’s word and that we are to take it as truth.

So, what is hell?  Chan argues that if Jesus didn’t agree with the widespread Jewish belief in hell, it would have been necessary for him to argue against it.  We know that Jesus was never afraid to go against any other commonly held Jewish ideas, such as their view of divorce, forgiveness, wealth, etc.  Chan goes on to provide further evidence as to how Jesus’ views of hell line up with the first-century Jewish view of hell, but here is what we can conclude:

1.  Hell is a place of punishment after judgment.  One of the best ways that I’ve heard hell described is this: after a lifetime of someone refusing to serve God- a lifetime of rejecting Him and choosing to live for themselves, God says okay.  He gives them their way- and without the presence of God, there’s just hell- because there is no good thing without the presence of God.

In Matthew 5, Jesus talks about hell in the context of judgment.  Chan explains that the passage talks about the outcome of going to an earthly court, but Jesus goes on to say that God’s courtroom will be much worse, for it is there that you can be sentenced to hell.  Jesus is referring to the consequences of judgment day, which will occur when He comes back.  The bottom line is this: Believers will have everlasting life, while unbelievers will have everlasting punishment.

2. Hell is described in imagery of fire and darkness, where people lament.  In Erasing Hell, Chan discusses the various occasions in which Jesus refers to hell as a “fiery furnace.”  But after listening to Keller’s sermon, I found a much deeper meaning behind this imagery.

Danish philosopher Soren Kierkegaard defined sin as building your identity on anything but God.  Keller goes on to explain that this happens when we turn good things (relationships, job opportunities, family, etc.) into ultimate things.  If we can look at anything in our lives and see it as more fundamental to our significance and security than the love and knowledge of God, we’re ultimately worshiping something else.  Once this happens, Keller says, it starts in our hearts a “spiritual fire-” that’s the metaphor for hell.

All it takes for a fire to start is the ignition of one spark- and the more the fire is fed, the more it grows.  When these good things come into our lives, they’re good.  But then we continue to place more attention on them until they consume our thoughts- until they’ve become ultimate.  We’ve all been at that point before- think about the importance you place on the perfect job or the perfect spouse or the perfect income level- are these fires in your heart?

I think this quote from C.S. Lewis wraps this all together very well: “Hell begins with a grumbling mood, always complaining, always blaming others… but you are still distinct from it.  You may even criticize it in yourself and wish you could stop it.  But there may come a day when you can no longer.  Then there will be no you left to criticize the mood or even to enjoy it, but just the grumble itself, going on forever like a machine.  It is not a question of God ‘sending us’ to hell.  In each of us there is something growing, which will be hell unless it is nipped in the bud.”

3.  Hell is a place of annihilation or never-ending punishment.  Chan says that in almost every passage that Jesus mentions hell, He doesn’t explicitly say that it will last forever.  He makes it very clear that it is a place of torment and a fate to be avoided, but we’re not told how long it will last.  Honestly, I think that the duration of hell shouldn’t be our biggest concern when it comes to this topic.  I think it’s more important to think about what people in hell will experience when they get there- are they still rejecting God?  Are they still feeding the fire in their hearts?  Are they filled with remorse?

C.S. Lewis says the doors of hell are locked from the inside.  Keller points to the story of the rich man and Lazarus in Luke 16– when the rich man finds himself in hell and looks up to see Lazarus in heaven, he’s still ordering Lazarus around.  His reality is still completely skewed and he’s still complaining and blame-shifting, just like C.S. Lewis talks about in the quote I shared earlier.  Even more important is that the rich man never asks to get out of hell- he simply asks for Lazarus to get in.  The rich man also strongly insinuates that God didn’t give him enough information (Luke 16:27).  The main point in all of this, Keller says, is that hell is a freely chosen identity based on something else besides God, going on forever.  It’s the thing we’ve made ultimate- the thing that started a growing fire in our hearts- going on forever, without the presence of God.

Why does it matter?

For all too long, learning about this topic as a Christian has simply given me a sense of relief when it comes to my eternal destiny.  But after studying this more, I should be so overwhelmed by how important this really is.  There are so many ways that I should be responding to the doctrine of hell.

1- I think hell causes us to look deep within ourselves and figure out who we really are.  As Christians, we have to constantly be aware of the fact that these fires come up in our hearts and we have to try our hardest to extinguish them.  But how can you do that?  The only thing that will put out these fires is having our identity based in what God has done for us- a core identity that rests in us no matter the circumstances.  Only God can provide us with an identity that will never fail us- we will never find that in a job or spouse or anything else.

2- Hell shows us that the God we serve is completely just.  Keller points out that if God were not angry at injustice, He would not be a God worthy of worship.  The only thing that can give us peace in this fallen world is knowing that there is a God, and one day he will make everything right.  Why?  Because he is the perfect judge.

3- Understanding the doctrine of hell is necessary for understanding the love of God.  It’s not just about understanding what hell is, because that will just put fear in a person’s heart- it won’t generate true faith.  It’s about understanding why Jesus died- why Jesus took the wrath of hell onto himself.  As sinners, we all deserve to go to hell.  But because of the cross- the ultimate representation of God’s perfect love and perfect judgment coming together- we don’t have to.  How can we even begin to understand how much Jesus loves us unless we know how much he suffered?  He paid our debt.  He took our place.  Keller says that when people try to get rid of the idea of judgment in hell in an effort to make God seem more loving, they make him less.  Because if there is no hell, what did it cost our God to love us?  That’s the beauty of the cross.

“We implore you on behalf on Christ, be reconciled to God.  For our sake he made him to be sin who knew no sin, so that in him we might become the righteousness of God… behold, now is the day of salvation.” -2 Corinthians 5:20-21; 6:2

To close off this post, I want to share one part from Erasing Hell that has been on my mind this entire time:

“It’s ironic–frightening, actually– that some people have written books, preached sermons, or written blog posts about hell and missed the purpose of Matthew 5: Whoever calls his brother a fool may find himself guilty of hell.”

I pray that everything I’ve written here reflects my intentions to write about the absolutely amazing God we serve.  This post was a tough one for me to write, and if you have any questions or need clarification on anything that I said, please contact me.