Well, I’ve officially completed another semester at UNC.  During finals week, I kept wishing for the end of the stress and the studying; now, I’m in a bit of a panic as I realize that I am over halfway through college- where is the time going?! And what on earth am I going to do with my life after I graduate?  (The life of a journalism major, ladies and gentlemen.)  But I’ll save those concerns for another time- because right now I’m enjoying sleeping until noon and spending time with my family.  Ahh, Christmas break.

Last week my family and I visited my grandparents to celebrate an early Christmas with them.  For those of you who were around last year when my grandfather’s struggle with Alzheimer’s disease became a harsh reality (and for those of you that weren’t, you can read about it here, here, and here), you know that these visits are never easy for me.  Last Christmas, our whole family came together to keep our Christmas traditions alive, all the while knowing that it would never be the same without my granddad in the house.  We all piled into my granddad’s room at his care facility, hoping to reinvent the feeling of comfort that we have all always felt from being together at family gatherings.  There were a lot of emotions and a lot of tears, and no matter how much everyone longed for that inherent joy that we had felt from being around each other in years past, we all knew in the back of our heads that this notion was a tall order.

Throughout the past year, I think we have all learned that life goes on.  That’s not to say that my granddad has been forgotten in any way, because I still think about and pray for him all of the time, and so does my family.  We all still visit him as much as we can and we never lose the faith that he taught us all to have, even in a situation like this.  But learning to continue on with life was something that we needed to learn, because it became very evident that dwelling on this situation was not healthy for any of us.  But I think there’s a distinct difference between moving on with life and negating your feelings in an effort to protect yourself.

…I didn’t realize until last weekend that I had chosen the latter.

When I flashback to a year ago as I stood in a hospital room with barren walls and a tiny window, watching my granddad shuffle around the room without any purpose or direction, I promised myself that no matter how hard it was, I would be completely engaged in the situation.  I promised myself that I wouldn’t let fear get in the way of allowing my emotions to be accurately portrayed- I promised that I wouldn’t shut down to the rest of the world just because this was hard to deal with.  So as I stood in that room, I stayed engaged.  I fought hard to hold back tears until I left my granddad’s room, but as soon as I walked out of the door, I sat on the floor and bawled my eyes out.  It would have been a lot easier to just isolate myself both mentally and emotionally from the situation, because I hate crying and I never wanted to be the person sitting in a hallway with that much emotion pouring out of me.  But in my heart, I felt that if my grandparents had to experience this emotional roller coaster, then it was wrong for me to cowardly avoid it by negating my feelings.

Somewhere along the way, I guess that idea got away from me.  I think my natural tendency- and maybe everyone’s natural tendency, to a certain extent- is to look away from the things that are going to stir up difficult emotions.  It’s only when I push myself through a thought process like the one I talked about earlier that I can break that tendency in certain situations, but not all of them.  So when I walked into my granddad’s room last weekend, I gave him a hug and I told him that I missed him, and in the hours to follow, I sat in a chair on the other side of the room, simply watching the interactions in front of me.  My grandma asked if I wanted to take her seat so I could be closer to him, but I told her I was fine where I was- and at the time, I wasn’t actively trying to avoid any certain feeling, I just thought in my head that I was being nice by allowing my grandma to sit beside him.  I think that the devil puts those thoughts in our head to justify our defiance of what God calls us to do- and the scariest part of it all is that a lot of times, we don’t even know what’s happening.  It’s only in hindsight that I’m realizing that instead of being engaged with what was happening in my granddad’s room, I was numb to everything going on around me.  The scared look on my granddad’s face.  The loss of joy in my grandma.  The sweet voice of my little sister when she observes that my granddad “doesn’t feel well.”  The pain and the hurt of all of the Alzheimer’s patients in that building who aimlessly walk the halls.  All of it passed me by, and I was numb to all of it.

The problem with being numb is that it doesn’t actually take you away from the emotional side of things.  Instead, you just slowly fill with regret at all of the important moments that you addressed with indifference.  Sitting in that chair as I visited my granddad that day didn’t protect me from all of the hurt that comes from this situation, it just fooled me into believing that going numb was the best way to deal with it.  But going numb never helps.  And being disengaged from situations that are important to the people around you just makes things even more difficult.  I think God despises apathy and indifference, because He knows that our messed up hearts mistake such dangerous approaches as acceptable reactions.

Moving forward, I think that this is something I really need to work on.  I always give my sister a hard time for wearing her heart on her sleeve because it means that she shows emotion about everything, but I think there’s something to be said for people who aren’t afraid to be engaged in their surroundings, no matter how hard it becomes to do so.  And even more than that, there are so many times in which I become numb to what God is asking me to do.  I fall out of consistent prayer and I try to handle things on my own and instead of being vulnerable to the revelation of God’s plan, I choose to negate whatever signs He is trying to show me and I go my own way.  And I always fail.  Always.

We all owe it to each other in our relationships to be all there and to be fully engaged with one another- God calls us to love one another, and I think this is an integral part of doing so.  So wherever you’re going or whatever you’re doing, no matter how hard the situation, be all there.  Fight the urge to turn away from it all, and open your heart to people who need it.

It’s absolutely amazing to me that even now, my granddad still teaches me so much about life.  Praise the Lord for such a great man. 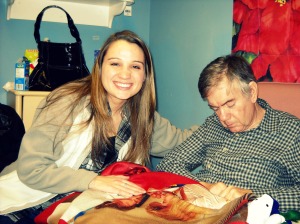