Yesterday morning I said goodbye to the group of people that I have literally spent every moment of every day with for the past month.  As I got in a cab and waved goodbye to the faces that provide such a vivid reminder of how absolutely wonderful this month has been, it was all I could do to hold back tears.  I wish that there was a way for the people who weren’t on this project to truly understand just how great this experience has been, but I’ve had to come to terms with the fact that there are no words to describe all that God has done for me through placing me on this project.  It has been a beyond-wonderful experience, and I hope that this post at least sheds some light on what I’ve learned throughout my time in New York City.

I spent some time today looking back on some of my blog posts, like the one I wrote when I had no idea what I was doing this summer, and even though I spoke a lot of truth in that post I was secretly praying that God would place me in an internship rather than “making” me go on project.  Or the one when it felt like my world had been shattered, and all I really knew was that God is good.  It was only days after that I committed to go to New York, and I wrote a post talking about the power of God’s plans over our own.  Right before I left, I wrote a post that basically said “I have no idea what’s about to happen to me,” and I’m so glad that I didn’t know, because it has made the Lord’s work in my life that much sweeter.  When I look back on all of this, it reminds me that God is working on my heart each and every day; when I applied to go on Summer Project, it was honestly a last resort at best.  I don’t think God ever wanted me to experience that time when it felt like my world had fallen apart, but He also knew how genuine my prayers were for Him to show me where to go this summer — and in all of His power and might and love, He was willing to do whatever it took to get me exactly where I needed to be.

Now I’m here — back in a familiar place, but as a different person.  Even though I’ve kept many of you updated on what was happening week-to-week in New York through my blog posts, I get to use this one to reflect on the project as a whole, which is one of my favorite things to do.  So to all of you who are about to press through this post filled with overwhelming emotion and reflection, I am truly appreciative.  Here goes.

Like I mentioned before, I can see so clearly now that God has been preparing me for this project long before I even began to consider it.  I knew from my experience there in December that I loved New York City, but seeing it through the lens of a mission trip only made my heart grow for it even more.  New York is a place that has so much poured into it in terms of the talent and performance abilities and refined skills that the thriving professions there require, but it’s also a city that pours out so much in terms of its tourist attractions, major business centers, and especially in things like the film industry.  I can’t even tell you how many people I met who either have or will have such a great deal of influence, and they are a direct reflection of that city — the people who are “making it” there are doing so out of an indescribable level of passion and drive.  The cool part about all of this is that churches are actually springing up all over the city, and their attendance levels are increasing — if this great city in all of its influence became a body of believers, I think the results would be absolutely amazing.  The people there are obviously pursuing their passions in a venue that requires them to put virtually everything on the line, and they’re accepting the challenge… can you even imagine if a city of 9 million people felt that same passion for Jesus?  This is a place of such great potential, and it’s really exciting.

As I talked to students on campuses every day, I was often forced to ask myself what made me so different from them.  As I sought to understand why they believe the things that they do and I ended a lot of days feeling defeated by the idea that they wouldn’t “choose” God, I finally came to the realization that I didn’t choose God either — He chose me.  I’ve never understood what God is doing in my life because of any intellectual capability or philosophical understanding; I’ve come to know it and see it because He has revealed it to me out of an amazing love.  And on days when my sin became very clear to me either through my apathy or irritation or impatience while on campus or with the people on project, I realized how poorly I reflect God sometimes and how truly blessed I am that He still looks at me and says, “I want her.”  I often forget that if I had been alive during the time when Jesus was crucified, I would be in the crowd mocking Him — and when that became real to the point where I could feel the weight of being chosen despite my sin, I was beyond humbled.

More than anything else, what this experience has shown me is that the Lord’s plan is always better.  And even though I’ve known that in my head for a long time now, this is the first time in which I can truly feel how real that statement is.  Before this project, I often used this statement as a way to calm my nerves when I didn’t know what was to come or when I needed reassurance that I didn’t have to figure all of this out on my own… but now it means so much more than that.  It means that even when life is good, even when it feels like the world’s definition of prosperity is sitting right before me and all I have to do is reach out and grab it — I will choose to walk away from it all if it’s not part of God’s plan.  It means that I may have to choose a less prestigious job or live in a place that I don’t really want to be or face challenges that I could have easily avoided had I gone my own way — but more than any of that, it means that my happiness and the weight of my life will rest in nothing but God’s plan, and it will bring me far greater joy than anything I could craft for myself.  I was talking to my roommate about this last night, and she experienced the same realization last summer and responded to me by pointing out that when we constantly remind ourselves of this and truly live by it, what bad thing could ever truly crush us?  Nothing.  Absolutely nothing.  It is honestly one of the most freeing things I have ever come to see in my life thus far, and it could have been a very long time before I realized it had I not come on project.

When I get back to school in the fall and I tell people that I went to New York this summer, a lot of them will probably ask me if I met a celebrity or bought a stolen purse on the streets of Chinatown or went to Times Square and Grand Central Station, and I’ll get to tell them about all of the cool experiences I’ve had this past month.  But what is going to be most vividly burned into my memory about New York City is the fact that in just 4 weeks, I saw God work in a way that I have never felt so deeply before in my life — He worked in the hearts of the people we talked to, but He also worked heavily on our own hearts as well.  I am so indescribably grateful for all that has been shown to me, and it has been so awesome to look back on the months before I even arrived and it be so evident that God was present in all of it.

I know that numbers don’t tell the whole story, but I want to show all of you who supported me and prayed for our team what you contributed to, so here’s what we did during our time on campus:

We initiated conversations with more than 400 students.

We talked about spiritual life with 235 students.

We shared the gospel with more than 100 students.

As for us, we were radically changed by a place called New York City and the God who created it.  Praise Him. 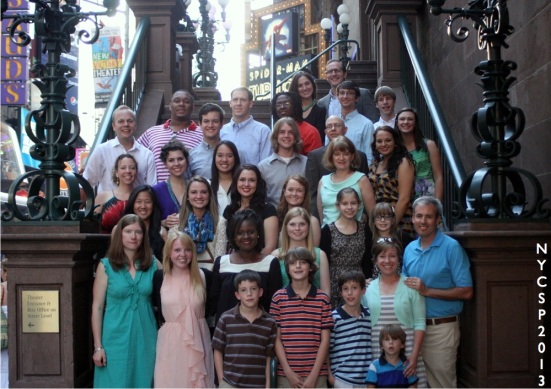 One thought on “project NYC: how it ends.”